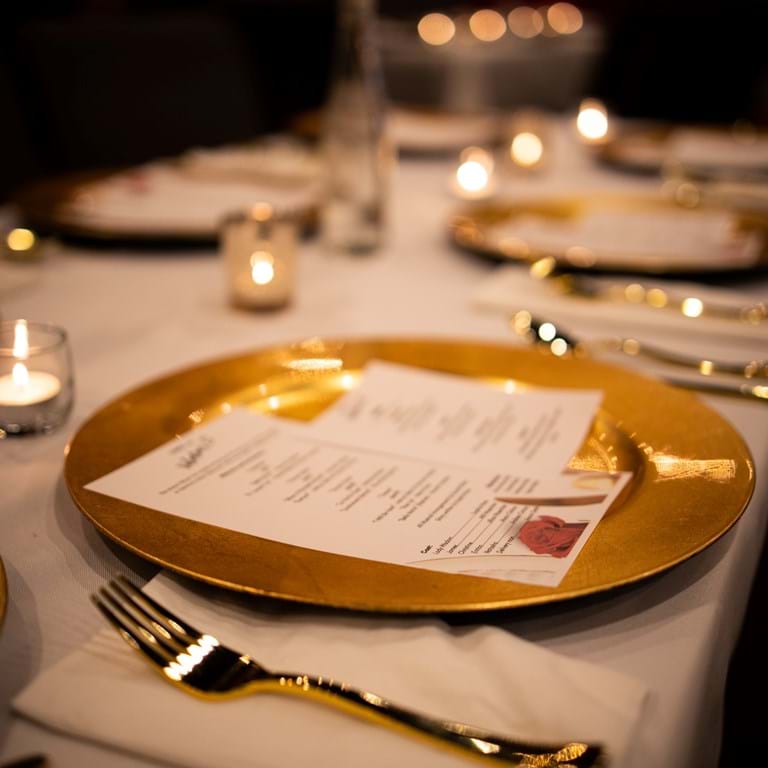 Back To All News

CIBSE recognises engineers at all stages of their career journeys, from students to those who have dedicated years to the industry at the annual President’s Awards Dinner, held at the Institute of Directors on 14 October 2022.

The awards perfectly encapsulated the five challenges laid out by Kevin Mitchell, CIBSE President, in celebration of the Institution's 125 anniversary: Celebrate, Inspire, Boost, Share, and Engage.

The 2022 President’s Prize: CIBSE Graduate Award recognises excellent understanding, application and analysis of building services engineering, science, and design. It is awarded to a final-year student of a CIBSE-accredited building services course for academic achievements. It also acknowledges the winner’s university, and the essential role played by quality academic education in building services.

Basem Ghanemi Pilar, from Liverpool John Moores University was awarded the CIBSE Undergraduate Award 2022. Basem, who is studying for an MEng in Architectural Engineering, won with his final-year project titled, Making the most out of heat pumps. His project looked at improving the heating systems of a Liverpool John Moores campus building completed in the late 1960s. The judges selected Ghanemi Pilar’s project for its topical and relevant subject matter, its depth of research, and its benefit to our collective strive towards net zero carbon.

The runners up were Deepak Sadhwani and Weiting Dai.

Laurence Brady on behalf of John Moores University, was also presented a trophy in acknowledgment of its achievement.

The Happold Brilliant l award was introduced by CIBSE to recognise excellence in the teaching of building services engineering. The award was the idea of the late Professor Sir Edmund "Ted" Happold and is sponsored by the Happold Trust. This year’s award went to University College London. The award was presented to Dejan Mumovic on behalf of the University by Priti Parikh, representing the Happold Foundation.

Each year, CIBSE awards medals to members who have demonstrated an exceptional commitment, dedication and service to the Institution and the wider industry.

This year, eight CIBSE members were awarded medals, three Gold - CIBSE’s highest accolade, and five Silver, were presented to individuals who fully embody the title of role model and are without doubt an inspiration for others in the industry, whatever stage in their careers. They have collectively helped to deliver CIBSE’s objectives of serving society and benefitting the public.

“The recipients of tonight’s awards have been recognised for their dedication and valued contribution to building services engineering. They are an inspiration, and I am honoured to be able to present these awards, celebrating their phenomenal achievements and commitment to the industry, to CIBSE, and to improving our built environment.” Kevin Mitchell, CIBSE President. 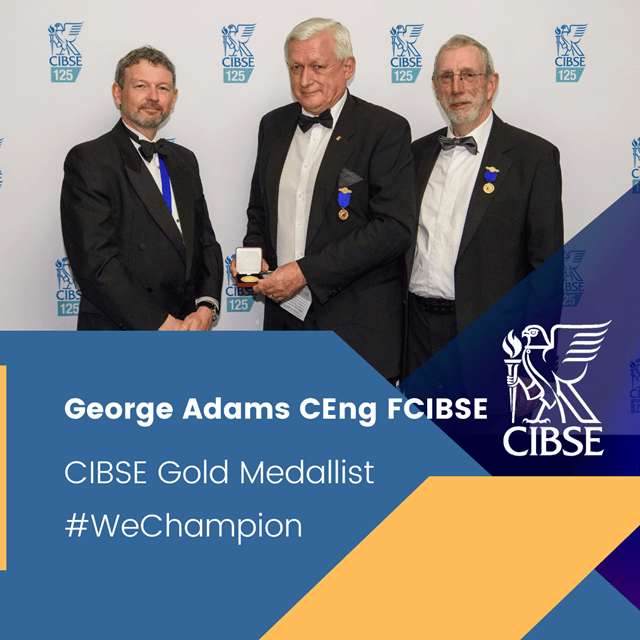 George Adams CEng FCIBSE received a Gold Medal. David Hughes delivered George’s citation. George’s career started in the building services division of Matthew Hall in 1973 as an apprentice, where he still works today as Director of Energy and Engineering. He joined CIBSE in 1981, becoming a Fellow in 2012 and CIBSE President in 2013. George is chair of the Cities and Climate Change Group and was fundamental in the formation of what is now the Inclusivity and Diversity Panel.  He currently chairs the CIC Green Construction Panel. He has also been involved in the post Grenfell Tower work around engineering competence, and chairs Working Group One which focuses on the competence of engineers. 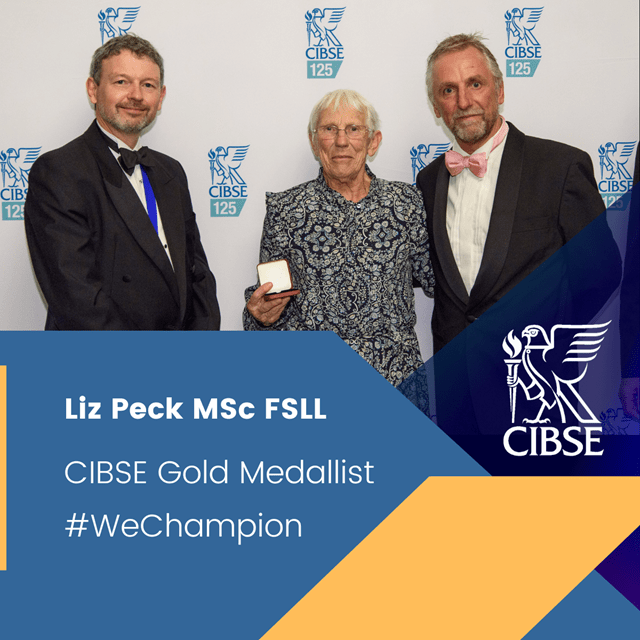 Liz Peck MSc FSLL was posthumously awarded a Gold Medal. Her citation was read by Mike Simpson. Liz started her career on the sales desk at Concord, joining the lighting design team at Marlin following a merger, with no previous experience. After a move to Philips, Liz studied for a Masters in Architecture Light and Lighting at UCL. She set up her own design practice and was SLL secretary for four years, becoming SLL President in 2015. Liz’s presidential year coincided with the UNESCO International Year of Light when SLL organised the Night of Heritage Light – lighting some of Britain’s most iconic locations. For her efforts Liz won a lighting award and was named Lux Person of the Year 2015. In 2020, Liz was writing the SLL Guide to protecting the night-time environment, bringing it close to completion. It was a subject that Liz was passionate about, both in her work protecting bats and in her architectural lighting design. 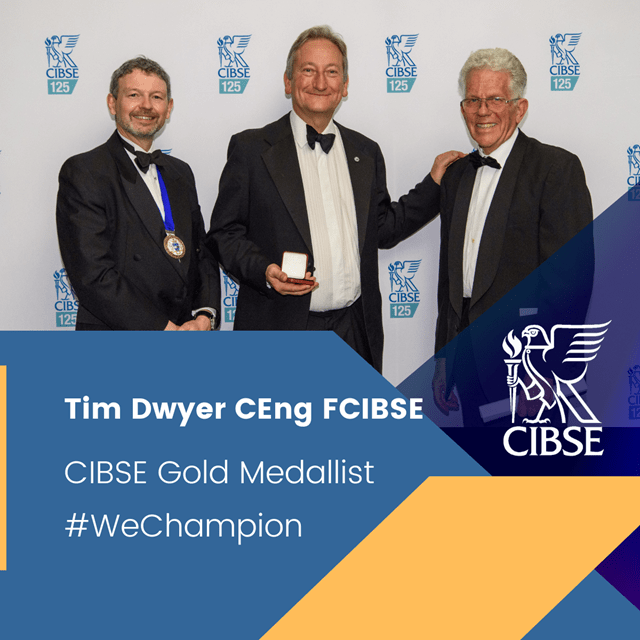 The third Gold Medal was awarded to Tim Dwyer CEng FCIBSE, with a citation read by Terry Giles. For over 20 years Tim has led the CIBSE ASHRAE Group to foster greater information exchange between the two organisations. He has been involved in the CIBSE ASHRAE Graduate of the Year since it launched 26 years ago. For the past five years, Tim has been managing editor of Building Services Engineering Research and Technology Journal (BSER&T) and is technical editor for the CIBSE Journal, where he also produces the Journal CPD modules each month. Tim has chaired the CIBSE Technical Symposium for 10 years, establishing it as the leading technical event in CIBSE’s calendar. His lecturing and mentoring at LSBU and more recently at UCL have inspired generations of engineers. 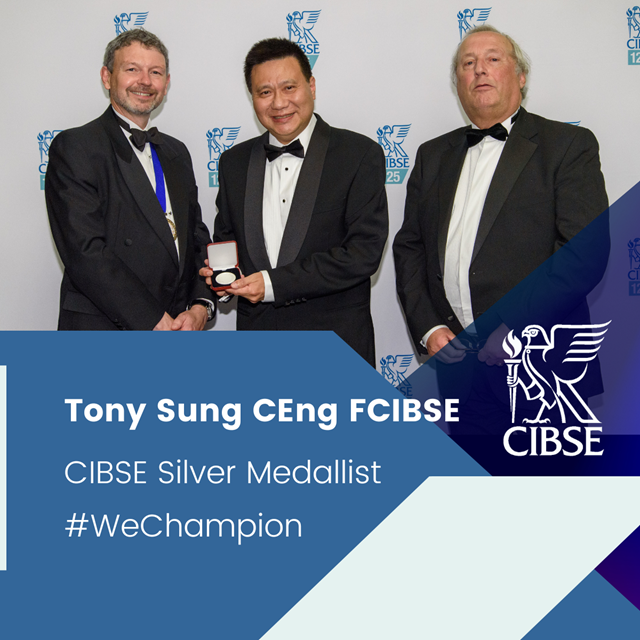 Tony Sung CEng FCIBSE was awarded a silver medal and his citation was read by Leon Markwell. In 1981, Tony taught the first MSc building services degree course in the UK, at Heriot-Watt University. He developed the first MSc sustainable electrical building services engineering course. Tony was Chair of the CIBSE Electrical Services Group, a CIBSE Board member, a membership interviewer, and an accreditation panel member. 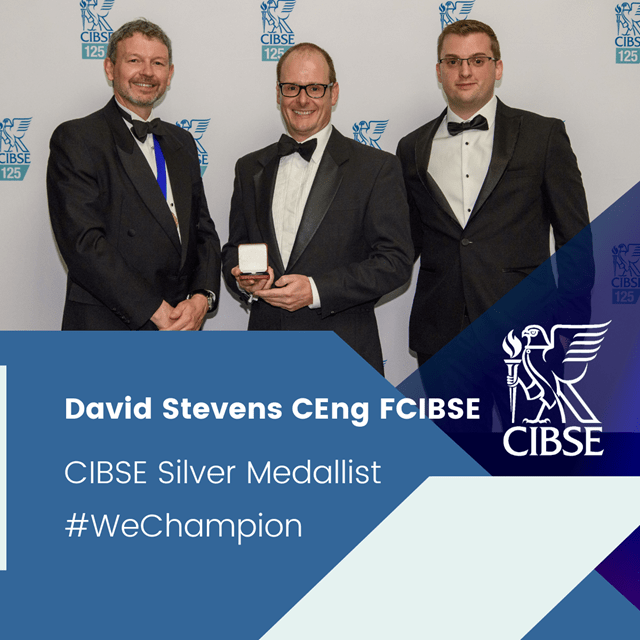 David Stevens CEng FCIBSE’s citation was read by Sebastian Gray. David serves on the CIBSE Board, is vice chair and secretary of the FM Group and a membership interviewer. He is a leading author for CIBSE Guide M and was awarded a presidential commendation in 2021 for his contribution to CIBSE’s Emerging from Lockdown series. 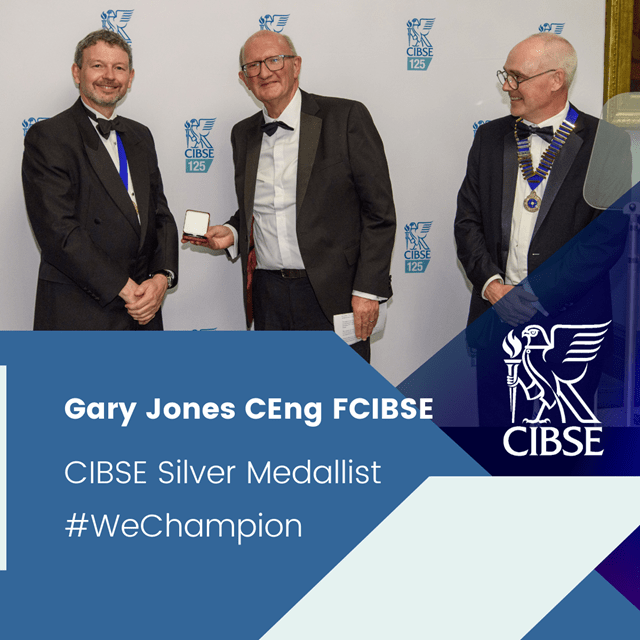 Gary Jones CEng FCIBSE’s citation was read by Peter Prentice. Gary was CIBSE Southern Region Chair twice. He was instrumental in establishing the YEN Southern Region group in 2014. Gary is actively involved in the CIBSE Education and Learning Group and is currently Chair of Constructing Excellence Hampshire. 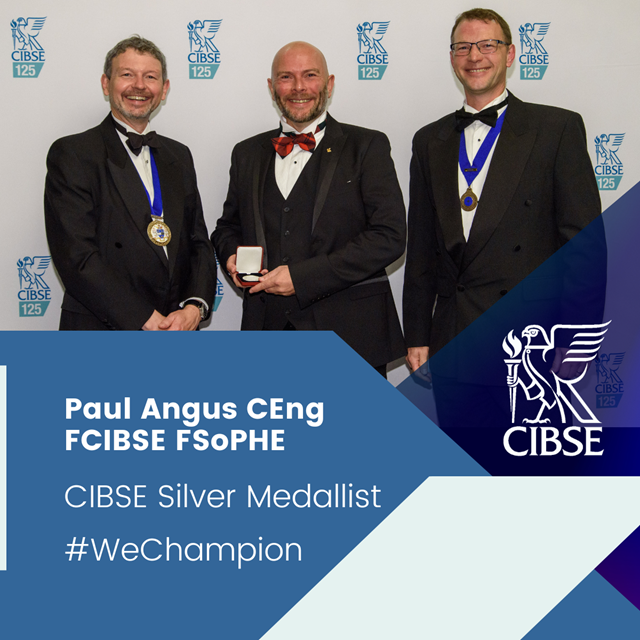 Paul Angus CEng FCIBSE FSoPHE was awarded a Silver Medal with a citation read by Mark Crawford. Paul has more than 20 years’ experience leading and managing complex projects, with his key discipline being in hydraulics (public health) engineering. He has been a volunteer on CIBSE committees since 2006, being CIBSE New South Wales chair, and ANZ chair, and is currently ANZ treasurer. 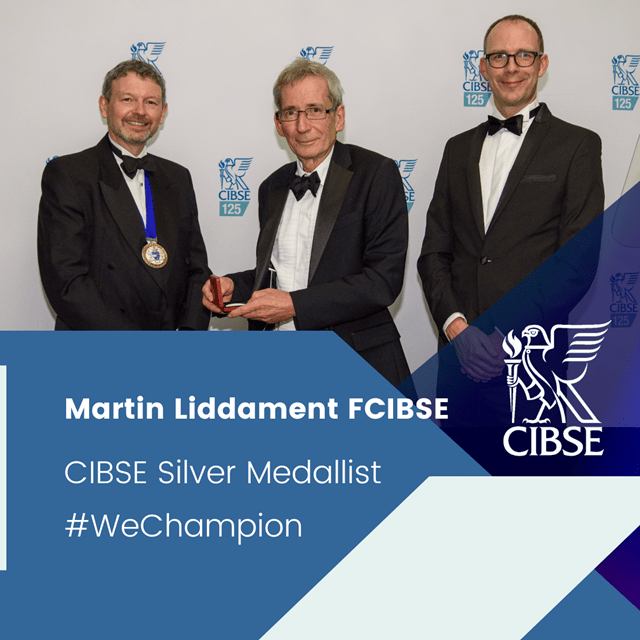 Finally, Martin Liddament FCIBSE’s citation was read by Chris Iddon. Martin joined the Air Infiltration and Ventilation Centre or AIVC in 1980, becoming its head in 1986. He has contributed to several of CIBSE’s publications including Guide A, B and Applications Manual 10. He began publishing the International Journal of Ventilation in 2001, editing it for 14 years.

Presentations were also made to the winners of the four awards for technical papers. Details of these awards are available via https://www.cibse.org/policy-insight/news/cibse-recognises-technical-papers-covering-issues-of-industry-wide-international-interest

Additionally, the Ken Dale Travel Bursary 2022 was presented, with more information about his year’s recipient available via https://www.cibse.org/policy-insight/news/2022-ken-dale-bursary-awarded-to-project-improving-access-to-lighting-in-rural-communities-in-southern-africa

More information about the Awards is available online via https://www.cibse.org/about-cibse/awards-and-medals